Your basket is empty.

⇒ To the website of the "Lady of All Nations" 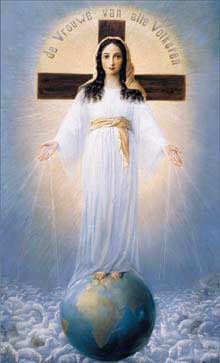 Important information about the “Lady of All Nations”

However, an important point has to be made concerning our ecclesiastical obedience: the permission for the title “Lady of All Nations” and for using the image and prayer may in no way be seen—not even implicitly—as recognizing the supernaturality of the apparitions and messages.

The spreading of the image and prayer, known until now as the “worldwide action”, particularly in these times of the pandemic and economic, political and social crisis, should give people—independent of their religious affiliation—consolation, courage and confidence.

It was Jesus Christ Himself Who “in greatest need” from the Cross entrusted all people to His mother when He said to John, “Behold, your Mother!” (Jn 19: 27)